In Peru, tourism is having its moment in the sun, growing annually at a rate of 25% over the past five years. Anyone who has visited this South American nation returns with a deep appreciation for the friendly people, beautiful landscapes, and rich and diverse cultural heritage that is on constant display.

The country is as complex as the most intricate and exquisite weavings made there. For travelers, there are so many things to do in Peru. Festivals spill from churches into the surrounding streets, shaman ceremonies mark ancient rites, and bustling urban centers seamlessly turn to quaint towns and cobblestone streets as you wander.

The vast majority of Peru tourism takes place in the Cusco region and revolves around visits to the famed Inca citadel of Machu Picchu. Under UNESCO protection, the archeological masterpiece has been placed under restrictions by the Peruvian government for its preservation. So it’s not as easy as it once was to visit Machu Picchu.

But there’s so many others things to do and see in the Peruvian Andes beyond Machu Picchu. So this week, we’re using the blog to help travelers make the most of their trip to Peru’s Sacred Valley, beyond simply snapping some shots atop South America’s most Instagrammed location.

The Peruvian Andes (which includes the Sacred Valley, Inca Trail, and colonial city of Cusco) is rich in archaeological sites and opportunities for cultural immersion. Check out these seven attractions in the Peruvian Andes, and leave us a comment if you’ve got suggestions to add to our list! Ollantaytambo (referred to as “Ollanta” by locals) is a town in the Sacred Valley near Cusco, in the Southern Sierra region of Peru. This is where the Incas retreated after the Spanish took Cusco.

Much of the town is laid out in the same way as it was in Inca times. The ruins here are particularly impressive. With great religious significance in the region, they doubled as the last and largest defensive structures near the plains below, where the Incas defeated the Spaniards in battle.

A fun tip: While wandering the town, look red plastic bags hanging outside on posts. These houses are where locals go to drink chicha, an alcoholic brew made out of corn. This is a great way to meet locals… provided you speak enough Spanish to communicate with the other chicha drinkers. Peru is a shopper’s paradise, especially if you have an appreciation for rich textiles, handmade home goods, and local art.

Known across the world for its bustling marketplace, Pisac’s Mercado de Artesania is by far the biggest and most visited in the region. Official market days are Tuesday, Thursday, and Sunday, when tourist buses descend on the town in droves. However, the market has taken over Pisac to such an extent that it fills the Plaza de Armas and surrounding streets every day. Visit on Monday, Wednesday, Friday or Saturday if you want to get a bargain, but prefer to avoid the worst of the crowds.

You can also visit the nearby Mercado de Chinchero. While the Chinchero market– held on Tuesday, Thursday, and Sunday– is less touristy than the one in Pisac, it’s well worth a special trip! The impressively deep, amphitheater-like terracing of Moray is reached by traveling through the village of Maras. It’s a fascinating spectacle, with concentric terraces carved into a huge earthen bowl. Each layer has its own “micro-climate,” according to its altitude.

The theory is that Inca farmers used Moray as a sort of laboratory to determine the optimal conditions for growing crops of each species. The site is made up of three massive bowls, one of which has been planted with various crops as a kind of living agricultural museum.

Though refreshingly off-the-beaten-path, this site is not challenging to reach. You can take any transportation bound between Urubamba and Cuzco via Chinchero and ask to be let off at the Maras/Moray turnoff. Taxis usually wait at this turnoff to take tourists to Moray and back. You may also be able to include a visit to Moray in a more comprehensive tour of Cusco’s archeological sites. 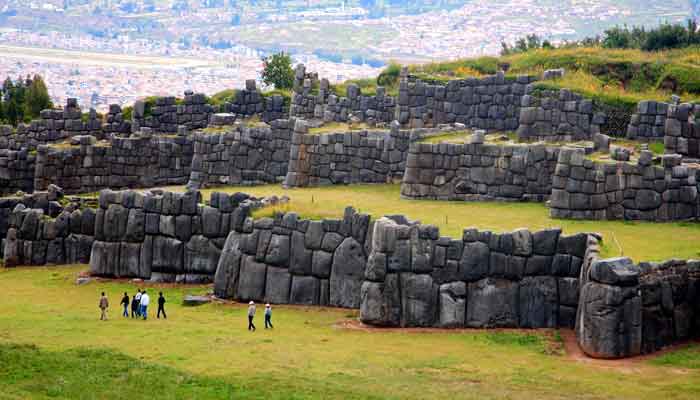 Located on a steep hill that overlooks the city, this fortified complex made of massive stones has a wide view of the valley to the southeast.

Archeological studies of surface collections of pottery found at Saksaywaman indicate that the earliest occupation of the hilltop dates to about 900CE. It’s difficult not to be completely in awe of the sheer feat it must have taken to build this impressive citadel.

Today, Peruvians celebrate Into Raymi– the annual Inca festival of the winter solstice and new year– which is annually held near Saksaywaman on June 24th. Cusco locals also use the large field within the walls of the complex for jogging, tai chi, pick-up soccer games, and other athletic activities. Perched high above the colonial center of Cusco, Cristo Blanco is a large statue of Jesus Christ that can be seen across the city. Measuring a whopping 26 feet high, the white structure was a gift from Arabic Palestinians who sought refuge in Cusco after World War II. The statue depicts Christ extending his arms outwards, and is very similar to Rio’s Christ the Redeemer, but much smaller.

Cristo Blanco was designed by local artist Francisco Olazo Allende and was placed on Pukamoqo Hill, which was a spiritual location for the Inca people. Local myth suggests that the hill holds soil samples from all the 4 quarters of the Inca Empire, or what the Incas called Tawantinsuyo.

Located only a 10-minute walk from the archaeological site of Saksaywaman, Cristo Blanco offers panoramic views across Cusco´s main square. You can see the Plaza de Armas, the entire historic center of the city, and as far as the residential district of San Sebastian. In the evening, Cristo Blanco is lit up and glows brightly above the city. Built in 1560 and taking nearly 100 years to complete, Cusco Cathedral is an emblematic feature of Cusco’s main colonial square, the Plaza de Armas.

In 1928, Cusco Cathedral was granted Minor Basilica status, and became the official seat of the diocese (under the supervision of a bishop). The full name of the Cathedral is “The Cathedral Basilica of the Assumption of the Virgin.” The iconic building was designated a UNESCO World Heritage Site under the “City of Cusco” listing in 1983.

While there, be sure to see the crypts, the Sala de la Plateria (“silver room”), the unique painting o the Last Supper, the choir stalls (made of pure cedar), and the Señor de los Temblores– a black statue of the crucifixion of Jesus that remains one of the most emblematic symbols of Christianity in Peru. Center for Traditional Textiles of Cusco

The Spanish conquered the Inca Empire in large part because of their gold. But for the Incas, their real treasure was the soft fleece of the alpacas and vicuñas they raised, which they wove into clothing, rugs, and tapestries.

While visiting the Peruvian Andes, it’s impossible to miss the ever-present alpaca, which are still raised for their soft fleece today. Garments created in this region from alpaca wool remain one of the world’s most prized, durable, thermal items of clothing, available in 22 natural earth tones and a vivid array of dyed colors. W

hen shopping, remember that garments knit from 100% alpaca do not have sewn seams. Visit the Center for Traditional Textures of Cusco Museum and Store to find a broad variety of high quality, Fair Trade textile products. –Sara McDaniel